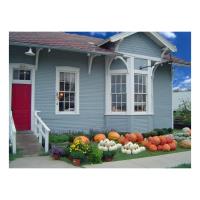 Depot Farm Market
Contact: Dan Kuhn
Address: 1101 30 RD US Hwy 36 Courtland, KS, 69939
Email Address: info@highplainsfood.org
Phone: 785-374-4255
Website: www.depotmarket.net
About Us
In the 1880’s, two train stations were built in Courtland, one on the mainline of the Rock Island and the other on the Sante Fe. In 1918, sparks from a burning livery stable blew across town, ignited the roof, and destroyed the Rock Island Depot which was located where Hansen Mueller is today. A boxcar was used as a depot temporarily until sometime in 1919 when the Sante Fe depot was cut in half and moved two blocks south to the junction of the Rock Island and Santa Fe. A twenty -foot section was added to the middle of this building to facilitate the commerce of both rail lines. For many years, the depot employed a telegraph operator, depot agent, and clerk. Additionally, a switch board operator worked outside. As many as 20 trains a day came through on the Rock Island, including the Rocket (Chicago to Denver) and five trains daily on the Santa Fe
Practices
At the Depot Farm we grow vegetables for wholesale as well as for retail sales in Courtland’s 120 year old Santa Fe Depot. Our family has been farming in the Courtland/Scandia, KS area since 1979 where we grow tomatoes, zucchini, yellow squash, peppers, cucumbers, cantaloupe, honeydew melons and watermelon.

We also specialize in specialty pumpkins and winter squash. We grow 40 kinds of pumpkins ranging from mini pumpkins to those big enough to make a doghouse out of.

You can’t buy a ticket to Denver in our train station but you can buy the freshest produce in the Republican River Valley.